Information Commissioner Gitanjali Gutierrez issued Decision 08/2021, in which she reviewed an internal review decision by the Police Complaints Authority [PCA] on a PATI request about the complaints filed following the use of pepper spray by the police on December 2, 2016.

A spokesperson said, “On 10 September 2021, Information Commissioner Gitanjali Gutierrez issued Decision 08/2021, in which she reviewed an internal review decision by the Police Complaints Authority [PCA] on a PATI request.

“The PATI request asked for records relating to a judicial review challenging the PCA’s decision on twenty-six complaints filed following the use of pepper spray by officers of the Bermuda Police Service against protesters on 2 December 2016. The PATI request also sought records on complaints and investigations, as well as the PCA’s meeting minutes.

“In response to the PATI request, the PCA disclosed a record summarising the complaints it received in 2017. The PCA further informed the Applicant that the meeting minutes did not exist. The PCA refused to disclose the records relating to the judicial review, mainly relying on the exemptions in section 26[1] of the PATI Act for information received in confidence.

“In this Decision, the Information Commissioner found that most of the records relating to the judicial review fall outside the scope of the PATI Act. This is because the records either are related to the Supreme Court exercising its judicial functions or because they were created or obtained by one of the public authorities listed in section 4[1][b] of the PATI Act while performing their functions.

“While the PATI Act did apply to some of the records related to the judicial review, the Information Commissioner concluded that the PCA was justified in denying public access to most of these records under section 26[1][b] of the PATI Act. This is because disclosure would constitute a breach of the PCA’s duty of confidence arising from its governing legislation, particularly section 25[1] of the PCA Act 1998. 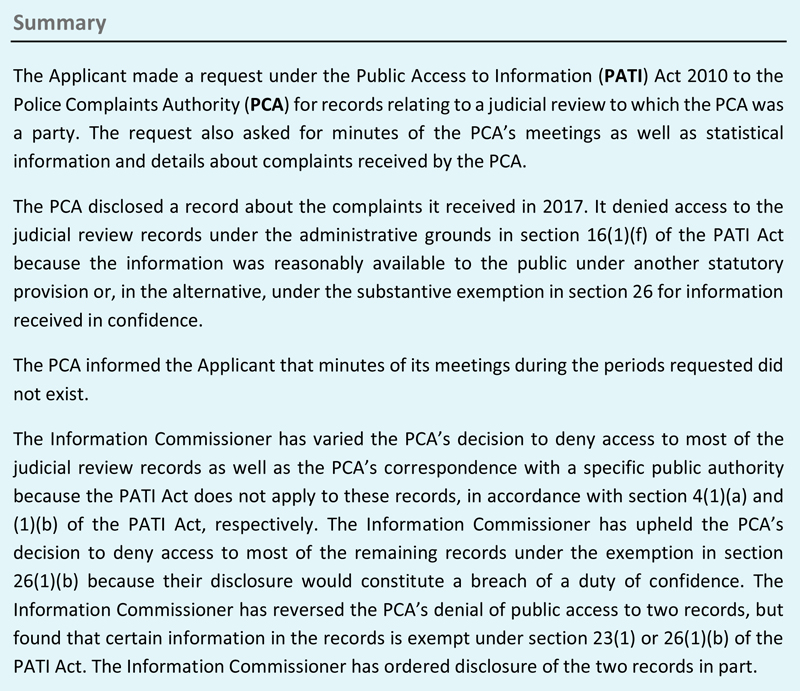 “The Information Commissioner also agreed with the PCA that the balance of the public interest did not require disclosure because the public “has a strong interest in ensuring that the PCA is able to conduct its functions effectively.” When it comes to the PCA’s ability to receive and take action on complaints from members of the public, the Information Commissioner emphasised that the PCA’s effectiveness is highly dependent on its ability to obtain confidential information from relevant parties.

“The Information Commissioner, however, found that the PCA was not justified in denying full access to two of the responsive records. She ordered the PCA to disclose these two records in part, with the exempt information redacted.

“Decision 08/2021 can be accessed online at www.ico.bm, along with all prior decisions.”